The locals say there are three languages spoken in Hawaiʻi. They are English, Hawaiian, and Pidgin. So what is Pidgin? It is a broken or simplified form of a language used to communicate between people of different languages. A sentence like, “Can you please repeat that?” can be reduced to a one-word syllable, “eh.” 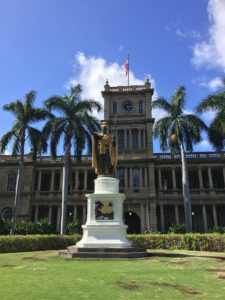 Here are some useful vocabulary words to learn.